Summary of Cracking the Genome 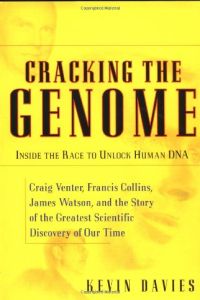 Ken Davies has written an informed observer’s account of the passionate race to solve what some believe to be the most profound scientific riddle of our era: decoding the human genome. His book is an undertaking of ambitious scope: He aims to paint the personalities in all their human colors and offer an accurate historical account, while also drilling deep enough into the research to do justice to the science. He does a beautiful job of suggesting the profound personal motivations of the two protagonists of the drama, scientists Francis Crick and maverick scientist J. Craig Venter. Short of earning your Ph.D. in molecular science, this may be as close as you ever get to understanding what the hoopla was really all about. getabstract recommends Davies’ book as a must for savvy thinkers in the biotech business, and an enlightening read for the rest of us mere (genetically flawed) mortals.

Kevin Davies was formally trained in the science of molecular genetics, and has hunted for genes that cause cystic fibrosis and muscular dystrophy. In 1990, he joined the prestigious British journal Nature, where Watson and Crick’s revolutionary discovery was first published. He met repeatedly with the principal figures in the race to decode the human genome throughout the course of that heralded scientific effort. Davies previously co-authored a book on the race to find the gene that causes breast cancer.

The Recipe of Life

In the spring of 1953, two promising young scientists submitted a brief manuscript to the editor of Nature magazine. The paper, which would alter the course of history and science, began with what would later be described as one of the greatest understatements of all time:

"We wish to suggest a structure for the salt of deoxyribose nucleic acid (DNA). This structure has novel features which are of considerable biological interest."

With those unassuming words, James Watson and Francis Crick introduced perhaps the 20th century’s most important discovery: the double-helix structure of life. Crick later observed that while the United States was only 200 years old, and civilization itself scarcely 10,000 years old, DNA and RNA have performed their mysterious evolutionary work for billions and billions of years. Crick wrote, "All that time the double helix has been there, and active, and yet we are the first creatures on Earth to become aware of its existence."

Thirty-seven years after the discovery of the double helix, the $3 billion Human Genome Project began its mission - decoding the precise sequence of the three billion chemical bases...