Summary of Creative Blindness (And How To Cure It) 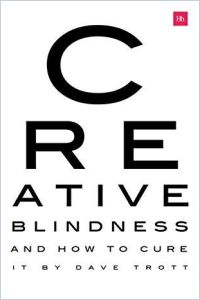 Legendary ad man, Dave Trott, assembled a collection of real-life fables, each with its own moral, teaching moment and creative lesson. He highlights inventive visionaries, unconventional thinkers and resourceful problem-solvers to impart lessons about life, success and advertising. Read together, the pieces form a picture of a new and different approach to working, living and spotting creativity in your surroundings.

Train yourself to spot creativity and you’ll notice it in unexpected places, unassuming people and unforeseen sources.

Winston Churchill coined the phrase “corkscrew thinkers” to describe people with the ability to think creatively. Unconventional thinking helped the United Kingdom defeat the enemy in World War II although its army was outmanned and had worse equipment. For example, England fooled the Germans with a planted dead body carrying false information, an airborne army of balloons and by making anti-shipping mines out of gobstoppers.

Once you train yourself to spot creativity, you’ll find it everywhere. It’s not the sole purview of artists or others in creative professions. Anyone can think in unconventional ways, and creative thinking is self-perpetuating. In the words of advertising legend Bill Bernbach, “It may well be that creativity is the last unfair advantage we’re legally allowed to take over the competition.”

In 1985, a cable TV station sent lucky winners free tickets to a Washington Redskins football game. People couldn’t believe their good fortune. To claim their prize they merely had to bring their IDs to the game. Cheerleaders ...