Random House, 2014
From the book: CREATIVITY, INC.: Overcoming the Unseen Forces That Stand in the Way of True Inspiration. Copyright 2014 by Edwin Catmull. Published by Random House, a division of Penguin Random House LLC
ISBN: 9780812993011
Pages: 341 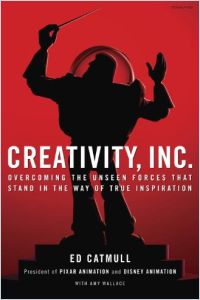 The review below was first published in the getAbstract Journal on Jun 12, 2015.
We’ve reviewed this title for you as we currently cannot offer a summary.

Though the cover lists Amy Wallace as a co-author, this is Catmull’s book and he tells it in his first-person voice. Wallace, a magazine writer, took on the task of sorting, editing and composing Catmull’s tales, ideas and mores into an organized form and she does a fine job. She is a solid standard prose stylist; all the punch comes from Catmull. And, indeed, the essence of Wallace’s collaboration was to stay out of his way, and she succeeds.