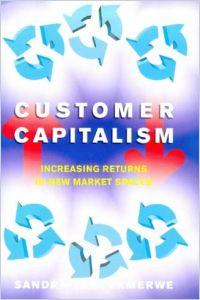 The death of the New Economy has been greatly exaggerated. That’s the message at the heart of Sandra Vandermerwe’s new book. While the heady valuations of the late ’90s are history, the fundamental changes that technology inspired during that time are here to stay. With that in mind, Vandermerwe presents analyses of tools that business leaders need to survive into the 21st century. The most insightful of these is a breakdown of customer feedback loops and how they can be harnessed to lock in business. The book can’t avoid many of the shortcomings that pervade most New Economy literature, like the tendency to advise readers to remake their businesses in anticipation of future customer needs, without commenting on how exactly that can be achieved. Nevertheless, if you’re a manager who suspects that the innovations of the past decade might still play a key role in the growth of business, getAbstract recommends this book to you.

Sandra Vandermerwe, a management expert, holds the Chair of Management and is Professor of International Marketing and Services at Imperial College in London. She has consulted and conducted research on behalf of many business organizations. She won the European Marketing Case of the Year award several times, and has written two other business books.

Now that the dot-com bubble has burst, the idea that we’re in a new phase of economic activity - the so-called knowledge economy - seems either passŽ or irrelevant. But the traditional economy always had its shortcomings. Despite all the advantages of size, only about 30% of the Fortune 500 companies from 30 years ago still exist.

Although traditional capitalism made companies incrementally more efficient, it usually didn’t stimulate the type of innovation that was necessary to keep them at the top of their game for the long haul.

A new market dynamic, "customer capitalism," has replaced traditional capitalism. Customer capitalism gives you an opportunity to sustain your competitive advantage, if your company knows how to lock in its installed customer base. This is the pivotal group of people who want your company to be their dominant or sole choice in its field for the foreseeable future. One major barrier to entering a market is the prospect of appealing to customers who already are loyal to someone or something else. To achieve this, your company must understand the 10 principles of customer capitalism: