Summary of Danger in the Comfort Zone 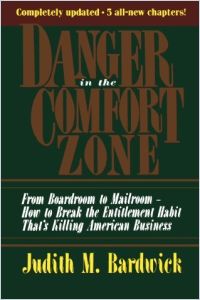 At first glance, Judith Bardwick’s influential book, first published in the early 90s, seems scarcely relevant in the opening months of the 21st century. After all, the sense of corporate entitlement that she documented was certainly swept away in the layoffs, restructurings and reengineerings of the last decade, right? Of course, anyone working in a large organization today knows that’s not entirely the case. Bloated bureaucracies still exist. But more importantly, Bardwick’s simple observation that external economic environments influence and even create internal workplace environments is just as true today as it was the day she wrote it. So too are her words of advice about managing and harnessing employee fear to motivate a workforce into a productive mindset. That said, not all of Barwick’s observations have aged so well. For example, you’d be hard pressed to make the case today that the work ethic has died in America. Nevertheless, getabstract recommends this book not as a slice of management history, but as a relevant and practical discourse on employee motivation.

Judith M. Bardwick , Ph.D., is a management consultant whose clients include IBM, 3M, U.S. West, Johnson & Johnson, Baltimore Gas & Electric and Hewlett-Packard. She is a clinical professor of psychiatry at the University of California, San Diego, and lives in La Jolla, California. Dr. Bardwick is the author of The Plateauing Trap, The Psychology of Women and In Transition.

The Attitude of Entitlement

In corporate America today, many people have this sense of entitlement. Even if they aren’t really contributing, they still expect their regular raise and their scheduled promotion. Despite the layoffs in recent times, entitlement has become epidemic.

The work ethic has been declining in America because of leaders, managers and employees who have a sense of entitlement at all levels. Employers also have failed to hold people accountable for doing good work. Since managers no longer expect employees to excel, evaluating performance is no more than a half-hearted effort.

At the country’s largest corporations, one consistent behavior (backed up by a matching bad attitude) has become evident: too many people aren’t doing their jobs. They’re simply putting in face time. They show up for work and believe that’s all they...