Summary of Dealing with China 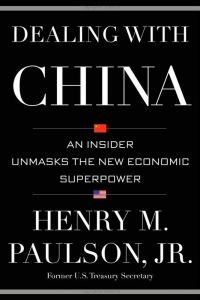 A former US Treasury secretary, Henry M. Paulson Jr. is a former chief executive officer of investment banking firm Goldman Sachs and past chairman of The Nature Conservancy.

A Front Seat to History

As a former CEO of investment banking firm Goldman Sachs and as US Treasury secretary, Henry M. Paulson Jr. dealt extensively with Chinese leaders. One of them, Zhu Rongji, organized the first stock exchange in China since the Communist Party came to power. Zhu became vice premier under Premier Li Peng in 1991, with daily responsibility for running and reforming China’s centralized command economy.

Zhu Rongji sought to reform state-owned enterprises (SOEs). He wanted to break the “iron rice bowl,” a comprehensive package of lifelong care and support services that SOEs provide to their employees. These companies supplied hospitals, restaurants, stores, schools and cemeteries for staff members and their families. The state-owned banks lending to SOEs were practically insolvent. Zhu recognized that overhauling SOEs would require banking reforms and an end to limitless credit and loan forgiveness.

Zhu was a force behind the China Telecom IPO because he believed taking the telephone giant public would force efficiency upgrades on other state-owned enterprises. However, SOE reform lost momentum in the early 2000s. Today even the best-managed...

The Third Revolution
8
End of an Era
8
Great Powers, Grand Strategies
6
The Haier Model
8
The Global Risks Report 2018
9
Our Time Has Come
8