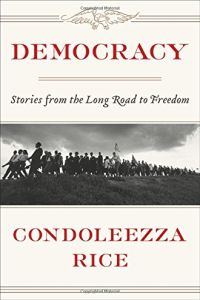 Former US secretary of state Condoleezza Rice brings expertise, in-depth knowledge and a passion for her subject to this highly readable, well-synthesized and insightful overview of democratic history. She weaves stories of past challenges and positive results into her message about the ongoing need to create and preserve democratic ideals and institutions, at home and abroad. Rice anchors her themes in the continuous development of American democracy and in her extensive first-hand work. Rice provides an overview of the transitions in nations around the globe from the 19th through the 21st centuries. She summarizes complex ideas, policies, individual roles, organizations and political parties, while providing historical context and perspective on the countries she covers. getAbstract recommends her important overview to those seeking to understand, develop, preserve or foster democratic ideals, regardless of political affiliation.

The Universal Declaration of Human Rights

In 1948, the United Nations General Assembly adopted its Universal Declaration of Human Rights. The “non-negotiable” rights it lists include “life, liberty and security of person,” “peaceful assembly and association,” and the freedoms of conscience, expression, opinion, religion, thought and participation in government “directly or through freely chosen representatives.” Democracy guarantees the right to speak freely and freedom from “arbitrary” state power. It uniquely insists that no one governs without the consent of the citizenry.

“Democracy is strongest when its base is widest.”

This requires a delicate balance among the executive, judicial, and legislative branches; between central and regional efforts; between civilians and the military; between group and individual rights; and between society and the state.

Born in Birmingham, Alabama, in 1954, author Condoleezza Rice was an “eyewitness” to multiple great openings toward democracy. In the US civil rights movement – part of which unfolded in Rice’s hometown – people seized their rights and liberties. The civil rights movement became a national awakening. The Civil Rights Act of 1964 and the Voting Rights Act of 1965 are so significant that they amount to “the second founding of America.”

Democracy isn’t perfect or mistake-proof. Democracies begin when a “democratic opening,” an opportunity for political change, arises. American history traveled a “hard road” in its pursuit of creating and maintaining democratic equilibrium. Many democracies emulate the constitutional underpinnings of the United States. The Founders struck a balance that gave the state strength to execute critical tasks, but did not threaten individual liberties.

“Democratic transitions…require people to have a view of a better future and the will to achieve it.”

The Founders’ institutional design set five goals that appear in other “democratic transitions”:

As a model of the democratic process, the United States must support its founding idea: progress and dignity grow from “human freedom.” Nascent democracies may struggle to meet their citizens’ immediate needs. Mature democracies struggle “to govern effectively” when information and judgment move swiftly.

Even in America, proponents of democracy must guard against populism, nativism, protectionism and isolationism. In 2016, each of these movements appeared in the United States, the United Kingdom and parts of Europe. Trends that threaten democracy include Brexit, the UK’s rejection of remaining in the European Union; German and French battles between the far right and far left; and America’s election of its first president with no government experience. Russian interference in other countries, including Ukraine and the United States, is ongoing and disturbing.

No power can impose democracy on a nation from the outside. Transition to democracy is easiest when indigenous parties organize under effective leaders. Organizations that proliferated since World War II can help democracies grow, including NGOs that support liberty and human rights and groups that monitor elections and power transfers. Organizations in nations that successfully transitioned to democracy – such as Hungary, Poland and Taiwan – offer assistance and advice to democratization efforts elsewhere. A transition to democracy occurs when a democratic opening appears in one of the four institutional landscapes:

Rice accumulated her knowledge of foreign affairs and her experience as a graduate student of American and Soviet interests in aiding “developing countries” and as a student in the Soviet Union. She was America’s first female national security adviser and its first female African-American secretary of state. In that role, she witnessed two crucial revolutions against “oppressive rule”: the USSR’s collapse and “freedom’s awakening in the Middle East,” referred to as the Arab Spring. There and elsewhere, Rice found, “somewhere between chaos and authoritarianism lay democracy.”

“While those…who live in liberty express skepticism about democracy’s promise, people who do not yet enjoy its benefits seem determined to win it.”

Russia and Ukraine developed democracy through different, complex processes after the collapse of communism and the Soviet Union in 1989. “Internal reforms” and foreign policy modifications played important roles. This was notable amid the dramatic changes that took place after the decline of the Russian Empire and the 1922 emergence of the Soviet state. Russia moved toward democratization and privatization under the guidance of Mikhail Gorbachev, the general secretary of the Soviet Union’s Communist Party who became Russia’s first president.

“The creeping and subtle authoritarianism of illiberal elected leaders is a greater threat to democracy than if they were to crush it with tanks in the city square.”

Ukraine, tied to Russia throughout Slavic history since the ninth century, long battled for recognition as an independent country. Its democratic opening came with the crumbling of the USSR. In 1990, a newly established parliament declared Ukraine “sovereign,” and it gained independence in 1991. Divisions within Ukraine continue amid conflicts with its neighbors.

“It is generally not a good idea to alienate men with guns – at least until you disarm them.”

In Poland, which faced instability following the events that led to World War II, leaders of the Solidarity trade union movement helped the country make the transition to freedom in 1989. The EU and NATO played significant roles in assisting Poland’s path to democracy.

Colombia shows how “democratic security” can grow after colonialism, though it first underwent near-domination by the Revolutionary Armed Forces of Colombia (FARC). Rebels held so much power that the police and military couldn’t enter nearly one-third of the nation. The horrific violence that once affected cities like Medellín eased by the early 2000s.

History “‘is not decided in the foreign ministries or in the palaces of power but on the streets and in the workplaces’.” (Lane Kirkland)

In Africa, Kenya fought authoritarian leadership from its independence in 1963 through the first democratic elections in 2002. In Liberia, a country founded as a US colony for “freed slaves,” independence in 1847 gave way to tumult, with authoritarian rule, a coup and civil war. Ellen Johnson Sirleaf, who became president in 2003, was Africa’s first modern “female head of state.”

“As long as human beings fear those who are ‘different,’ prejudice and suspicion will be a part of the human experience – and America is no exception.”

Arab Middle Eastern countries faced internal challenges as they moved toward democracy. Whether Arabian monarchies, including Kuwait and Saudi Arabia, will become more democratic remains to be seen. Each demonstrates varied levels of conservatism, religious policy and personal liberty. These nations must address “freedom, knowledge and women’s empowerment.”

Moving toward becoming a democracy means taking a step forward, resting on a plateau, regrouping and then stepping forward once more. This ongoing untidy process requires determination. Budding democracies face the challenge of meeting their citizens’ essential needs. Mature democracies must govern well while keeping up with today’s speed of information. Constituents often voice frustration with leaders and institutions. For all the imperfections of democracy, as Winston Churchill pointed out, it is better than all other options.

“The work of building a stable democracy is never really done.”

Former US secretary of state and national security adviser Condoleezza Rice is a political science professor at Stanford University and a senior fellow of public policy at the Hoover Institution. She also wrote No Higher Honor: Extraordinary, Ordinary People.

End of an Era
8
The People vs. Democracy
9
The Road to Serfdom
9