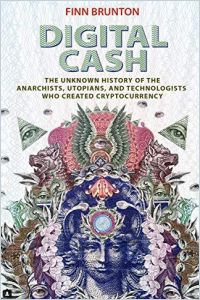 Cryptocurrency might seem like a new concept, but as professor Finn Brunton reveals in this intriguing study, bitcoin is the result of decades of arcane technological advances and fringe thinking in economics. He leads readers on a tour through a variety of attempts since the Great Depression to launch alternative currencies.  Brunton aptly lays out the utopian and dystopian visions that have dominated this often overlooked corner of the economy. His intriguing narrative will fascinate anyone interested in both the history and the future of money.

Finn Brunton is an associate professor at New York University. His previous books are Spam: A Shadow History of the Internet; Communication; and Obfuscation: A User’s Guide for Privacy and Protest.

Bitcoin isn’t the first alternative currency to capture the imagination of the disgruntled masses. During the 1930s Great Depression, as banks failed and bread lines lengthened in the United States, the circulation of US dollars slowed and then nearly ground to a halt. In response, many municipalities issued their own currencies; the Dow Chemical company created magnesium coins; and many stores bartered commodities such as eggs and honey. It was a perfect time for New York impresario Howard Scott to come onto the scene with Technocracy Inc., a scheme that promised an alternative monetary system.

The “Technate” – as Scott called his imaginary economic regime – would rule the United States and Canada. Master engineers would ban all nonessential activities. The means of exchange would be “energy certificates” that promised to be more reliable than the government-issued greenbacks that had let down so many Americans. The energy certificates, like many other creative currencies, belong to a category described by one historian as a “cosmogram” – a mashup of science, art, ...

Check Your Financial Privilege
8
What if bitcoin went to zero?
8
Blockchain Babel
8
The Future of Bitcoin
7
Narrative Economics
9
DeFi: The Hot New Crypto Trend Of 2020
8