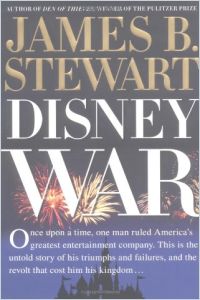 Pulitzer prize winner James B. Stewart paints a portrait of Michael Eisner that has more in common with a totalitarian dictator than with most CEOs. Stewart is careful, though, to trace the Walt Disney Company’s growth and success under Eisner, even though he was really running Disney for the benefit of just a handful of people - including himself. And, just as carefully, Stewart traces the company’s spiraling internal chaos. The pluses: the author tells an instructive, intricate corporate saga in intriguing detail. Minuses: He is no expert on the film industry and the narrative doesn’t build much momentum. Frustratingly, although no doubt for sound reportorial reasons, he also mostly refuses to draw conclusions until the short final chapter. getAbstract.com recommends this troubling portrait of corporate excess and misbehavior to all managers and to students of entertainment and media as a lesson on the pitfalls of untamed corporate politics and unbridled CEO power.

James B. Stewart is a regular contributor to SmartMoney and The New Yorker, and a former Page-One editor for The Wall Street Journal. He won a Pulitzer Prize for his reporting on the stock market crash and insider trading. He is the author of Den of Thieves, Blind Eye and Blood Sport.

The Not-So-Wonderful World of Disney

On Nov. 20, 2003, Roy E. Disney, the nephew of Walt Disney, met with fellow Walt Disney Company board member John Bryson at the "Team Disney" building at Disney Studios in Burbank, California. Roy hated the building, which he felt epitomized how the company had become overblown and pompous under the leadership of Michael Eisner, the chairman and CEO.

Eisner had built Disney from a sleepy backwater into a global media giant, but Roy and fellow board member Stanley Gold felt that Eisner had lost his way. Most of the board, composed of handpicked Eisner loyalists, disagreed. Now Bryson told Roy that the board wanted him - Walt Disney’s own nephew - to retire. Roy warned Bryson he’d made a mistake, then walked out.

Eisner came to Disney in 1984 after Roy and Gold led a board coup and ousted the previous chairman. A hotshot Paramount Pictures TV executive, Eisner arrived knowing almost nothing about Disney; he hadn’t even seen its classic cartoons. On the surface, this New Yorker from a wealthy Park Avenue family seemed the antithesis of Walt with his humble, middle-American background. But...