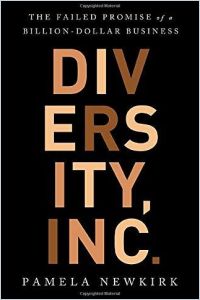 Most large companies have diversity and inclusion programs to raise awareness for discriminatory practices. But minorities still fall behind in representation across the board. Is corporate passion for equality more symbolic than serious? Drawing from ample statistics and robust historical context, award-winning diversity journalist Pamela Newkirk dissects the effectiveness of racial diversity programs.

Pamela Newkirk is an award-winning journalist and journalism professor at New York University who has written extensively about diversity in the news media and art world.

Despite high-profile efforts to promote diversity, racial inequality persists across all industries.

Diversity has become a booming industry. Yet actual progress toward increased diversity remains slow and ineffective. People of Color are underrepresented even in liberal fields like journalism, fashion and academia. Furthermore, many nonwhite employees hit a glass ceiling and are unable to progress to leadership roles: Fewer than 5% of Fortune 500 CEOs are of Asian, Hispanic or Black descent. The percentage of Black partners at US law firms crept from 1.7% to a mere 1.8% between 2009 and 2018.

In the 1980s, representatives of the journalism industry promised to make the demographics of their staff match the nation’s racial makeup by the year 2000. Yet, although almost 38.8% of the US population belong to a racial or ethnic minority, Black, Asian and Hispanic journalists combined held only 16.55% of US newsroom jobs in 2017.

Under public scrutiny for discrimination, companies including Facebook, Airbnb and Apple create diversity reports, fire people who make offensive comments and rush to appoint a few representatives of color...