Summary of Does Torture Work? 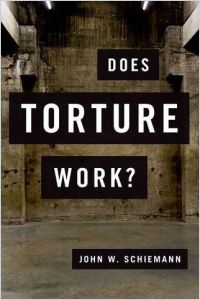 Fairleigh Dickinson University professor John W. Schiemann applies game theory to the horrors of torture to show that torture cannot yield valuable information. His analysis proves thought provoking and convincing. Schiemann reviews philosophical, ethical and political arguments for and against torture, and he evaluates how torture functions in practice as an information-gathering technique. Because Schiemann describes dreadful torture techniques and conducts his analysis using symbolic reasoning and quite complex game theory, his approach isn’t for every reader, although he restates most points in simpler prose. While any discussion of torture is sensitive and difficult to bear, including this one, getAbstract recommends these groundbreaking research insights to those interested in the military, politics, the war on terrorism, game theory and ethical decision making.

Author of The Policy of Pact-Making, John W. Schiemann is an associate professor of political science at Fairleigh Dickinson University.

In the argument for or against using torture to secure critical wartime information, “pragmatists” support torture if it gleans useful information. People known as “Kantians”– named for philosopher Immanuel Kant – believe that torture is simply wrong. “Khanians” – named after the warlord Genghis Khan – support torture as vengeance. About one in six Americans is a Kantian, one in six is a Khanian, and more than four in ten are pragmatists. But does torture work?

Game theory can help answer this question. It examines situations in which people choose among various options. Their choices affect the selections, choices and outcomes of everyone else in the situation. Experts can chart a game’s results, identifying what happens in each possible scenario. “Equilibrium” is the most “stable combination of actions.” At equilibrium, no “player” wishes to choose differently based on what other players have chosen. The word “game” is not used in the sense of fun, but in the sense of working out strategic choices based on what other players do.