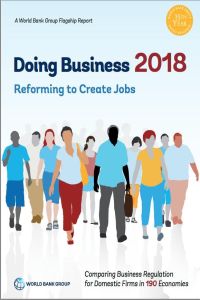 Why do some countries thrive as entrepreneurial hotspots while others don’t? Making it easier to do business certainly helps get the ball rolling. So say the results of the 2018 World Bank annual report on the impact of regulation on commercial activity across 190 countries. For instance, one way for a nation to make itself business-friendly is to create simple rules that enable start-ups to open readily. getAbstract recommends this comprehensive study to policy experts for its usefulness in identifying what works, what doesn’t and why, and to executives and entrepreneurs looking to expand their businesses to other nations.

Governments are aware that efficient business regulations yield economic and political benefits. That’s why 119 of the 190 nations surveyed by the World Bank implemented at least one commercial reform in 2017. But ease of doing business varies considerably among countries. For instance, an entrepreneur faces far fewer hurdles in starting a business in Canada than in the Philippines.

The circumstances that encourage greater business formation and enable entrepreneurs to flourish are many and wide-ranging, but cost is one crucial factor that can impede company start-ups. High fees and taxes restrict the creation of new enterprises and reduce competition.

Another distinguishing aspect is the availability of good credit information, which facilitates the flow of loans to fledgling enterprises and keeps interest rates low.