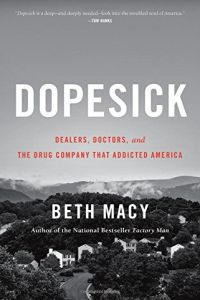 Award-winning journalist Beth Macy, author of Factory Man and Truevine, provides a bleak, well-researched, compassionate epic of heroin and opioid addiction in the rural Appalachian mountains of Virginia. A reporter for The Roanoke Times, Macy watched the opioid epidemic build amid rural, poor, white communities ravaged by globalization, automation and the coal industry’s decline. She paints vivid, heartbreaking portraits of poor and upper-class addicts and details the arc of morphine addiction from the turn of the 20th century until the present.

Best-selling author Beth Macy also wrote Truevine and Factory Man. She has received many reporting awards and won a Nieman Fellowship in journalism at Harvard University.

Macy offers astonishing, heartbreaking numbers: between 2003 and 2018, 300,000 Americans died of drug overdoses. Experts predict another 300,000 will die by 2023. Nothing kills more Americans younger than 50 than drug overdoses (ODs.) More Americans fatally OD every year than die due to gun violence or car accidents. More die annually from ODs than died of HIV at the height of the AIDS epidemic. Yet America has been slow to recognize the scale of this carnage and slow to respond to it. “Nothing’s more powerful than the morphine molecule,” the author writes, “and once it has its hooks in you, nothing matters more.”

Historically, Macy reports, the use of new drugs in the United States begins in poor, African-American urban neighborhoods and moves outward into whiter, more suburban markets. The burgeoning use of crack and cocaine followed that pattern. But, surprisingly, the author recounts, the opioid epidemic started in Appalachian mountain towns, rural Maine and midwestern Rust Belt counties – predominately poor and white areas.

Indistractable
8
Back to Human
8 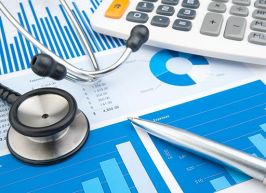