Summary of Drones and the Future of Armed Conflict 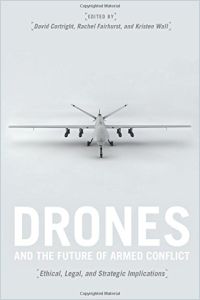 In this anthology of essays, drone warfare experts examine the most challenging issues in their field, including, notably, the targeted killings of terrorists and suspected terrorists. This range of opinions points out that drone strikes are useful tactically but may be unwise strategically in that they kill individual terrorists but can serve as powerful recruiting tools for terrorist organizations. Sophisticated targeting means operators can confine drone attacks to individual targets, mitigating the need for frontline troops and limiting collateral damage. Diverse authors – as edited by David Cortright, Rachel Fairhurst and Kristen Wall – offer opinions as well as an analysis that will interest national strategists, military theorists, international lawyers, government leaders, ethicists, weapons experts, counterterrorism professionals, military scholars, human rights champions, and anyone intrigued by drones and their future.

Rightsizing Expectations
7
War Is Not Over
8