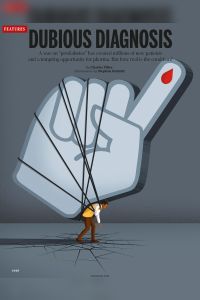 At the crossroads of consumer fear and medical authority, there is a land ripe with opportunities for specialty practitioners and the drug companies that love them. “Prediabetes” is a mischievous little diagnosis that remains unrecognized by most international diabetes organizations, but in the United States the number of people with the diagnosis grows at a rate similar to the growth of the bank accounts of the American Diabetes Association’s resident experts. This Science article provides the minimum-effective dose of rage against the medical-pharmaceutical complex.

Charles Piller is an investigative journalist for Science. He’s also written about public health for STAT, the Los Angeles Times and The Sacramento Bee.

Drug companies give huge sums of money to the specialty doctors who prescribe their drugs in standard treatment protocols.

From mid-2013 until 2017, Ralph DeFronzo received about 5 million dollars “including $1.3 million in fees paid directly to him for consulting, advice, and travel.” He’s an endocrinologist at San Antonio’s University of Texas Health Science Center, but the money came from the pharmaceutical companies that make pioglitazone, exenatide and liraglutide. They are drugs DeFronzo recommends for the treatment of “prediabetes.”

Guillermo Umpierrez, also an endocrinologist, received more than 6.8 million dollars between 2014 and 2017 from the same sources. Both are members of the American Association of Clinical Endocrinologists (AACE) and American College of Endocrinology (ACE), and both have been instrumental in creating treatment recommendations for “prediabetes.”

The A1c test is used to diagnose prediabetes, but standards are different depending on which country you’re in.

Immune System, Unleashed by Cancer Therapies, Can Attack Organs
9
Omen in the Blood
8

More than Medicine
9
Deep Medicine
9
Sleepyhead
6
Was There Ever Really a “Sugar Conspiracy”?
7