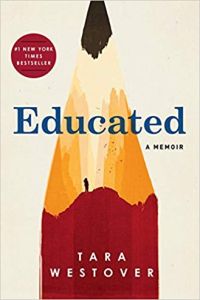 Accidents and abuse were part of Tara Westover’s upbringing. Classrooms and medical care weren’t. Born in 1986, she grew up in rural Idaho, the youngest of seven. Her father’s mental illness defined the world of her youth. She draws on her vivid memories and journal entries to illustrate the physical, emotional and intellectual landscapes of her life. Westover’s captivating voice illuminates family dysfunction, her passion for learning, the challenges of joining mainstream society and the ramifications of speaking up as she reclaimed her identity and well-being. She acknowledges the possibility of flaws in her recollections and uses pseudonyms for the most hurtful people in her life. Some readers should beware of avoiding possible triggers, since she describes troubling physical and verbal assault. Those interested in family dynamics, domestic violence, bipolar disorder and how people find their voices will find her beautifully crafted memoir compelling. Westover’s physical and moral courage will astonish readers, as will her writing skill and fearless honesty.

Lacking any formal education, Tara Westover, PhD, enrolled at Brigham Young University as a teenager. After graduating with a BA, she earned two degrees from Cambridge – an MPhil and a PhD in history – and taught at Harvard as a visiting fellow.

“Our Jagged Little Patch of Idaho”

Tara Westover recounts growing up at Buck’s Peak in the mountains of Idaho. Her father, Gene, ran a junkyard. Her mother, Faye, was a midwife and herbalist whose successful business included oils and salves, which she considered part of “God’s pharmacy.” Faye gave birth at home to five boys and two girls – Tony, Shawn, Tyler, Luke, Audrey, Richard and Tara. Like her siblings, Tara didn’t know what a classroom looked like. In fact, she asserts that she even didn’t officially exist, according to state records, until she received her Delayed Certificate of Birth at age nine. The children’s responsibilities were fluid; her parents often found it difficult to remember their kids’ ages.

Westover relates how Gene hated the government and believed in self-reliance. The family’s routines centered around preparing for the so-called Days of Abomination. Gene worked toward the time when off-the-grid living would sustain the family. Though he didn’t believe women should work, he accepted his wife’s income from being a midwife because her work subverted the government and supplemented his efforts in his junkyard and as a laborer building hay sheds and barns.

Leadership in Turbulent Times
9
The Stuff
9
Be Fierce
8