Summary of Eisenhower on Leadership 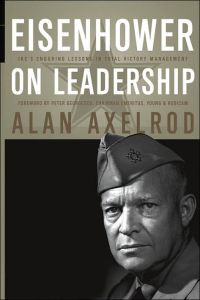 U.S. Army General Dwight David Eisenhower was the Supreme Commander of Allied forces in Europe during World War II. A brilliant strategist and an expert in logistics and organization, Eisenhower planned Operation Overlord, the successful 1944 invasion of Europe by way of the English Channel. D-Day remains history’s largest amphibious assault. In 1945, at the height of his military power, Eisenhower commanded more than four million troops from five different nations. He functioned as a manager of managers, directing all military activities in Europe. He was, in effect, the “CEO” of the war in Europe – and indeed, in a letter to Lord Louis Mountbatten of Britain, Eisenhower described his role of Supreme Commander as that of a “chairman of a board.” How he successfully planned and coordinated the Allied military effort is the subject of this fascinating military history cum informative treatise on management by business writer Alan Axelrod. Axelrod applies Ike’s down-to-earth thinking to the management of organizations, people or important projects in a series of lessons – 232 of them, to be exact. This long, unprioritized list is more than most readers can really absorb. Nevertheless, getAbstract suggests that managers who want to learn what inspired, successful leadership truly means study this history of the European conflict from the uniquely informed perspective of Eisenhower, the ultimate insider.

Alan Axelrod, a former English professor, is the author of two bestsellers, Patton on Leadership and Elizabeth I, CEO, and more than 60 other books on management and business topics.

During World War II, General George C. Marshall Jr., U.S. Army Chief of Staff, promoted Dwight David Eisenhower, a little-known staff officer, over hundreds of senior officers to be the top commander of the American forces in North Africa, and then nominated him as Supreme Commander of the Allied forces in Europe.

For an American, this latter post was unique: No U.S. general before Eisenhower had led a military coalition representing different nations. What was Marshall thinking? He did not single out Eisenhower because of his heroic exploits on the battlefield: Eisenhower had spent his military career in administration and training. Instead, Marshall selected Eisenhower because of his superior leadership – in other words, management – abilities. He was a brilliant strategist. He knew how to plan and achieve objectives. He was able to direct and inspire others. He could get things done.

Most importantly, Eisenhower had an almost magical ability to work with personalities of all types. He was able to persuade temperamental military leaders such as U.S. Army General George S. Patton Jr., British Field Marshal Bernard Law Montgomery and Free...