Summary of Empire of Things 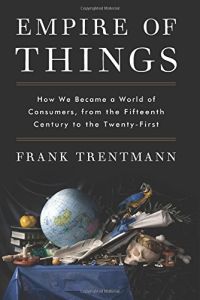 In this exhaustive study, historian Frank Trentmann traces the growth of consumer culture over the centuries since 1500. The grand sweep of history is here: the global spread of goods such as cotton, sugar and coffee; the rise of empires and colonialism; and the birth of the consumer culture of the 19th century. Trentmann offers highly granular glimpses of everyday life. You’ll learn, for instance, that a 16th-century Venetian named Andrea Faentino owned eight silver forks, while his contemporary Domenico Cappello had 12 forks. Trentmann doesn’t avoid the dark side of consumption, such as its exploitation of slavery or its impact on the environment. But, in the main, he offers an optimistic, colorful story of people’s ability to embrace a mass-produced culture without sacrificing their individuality. getAbstract believes that his detailed overview offers helpful background information for business students and professors, entrepreneurs and marketers, policy makers and international development officials.

Frank Trentmann teaches history at the University of London’s Birkbeck College and directed the Cultures of Consumption research program from 2002 to 2007. His other books include The Oxford Handbook of the History of Consumption and Consuming Cultures, Global Perspectives.

A “World of Goods”

In his 1776 book The Wealth of Nations, economist Adam Smith said that consumption was “the sole end and purpose of all production.” From the vantage of a 21st century awash in consumer goods, it may appear he stated his case too mildly. Since the 18th century, consumer culture has become a central fact of life. Thanks to improved transport, technological innovations and the rise of empires, capitalism has spread “markets, purchase and choice” worldwide. Consumption today affects identity, political activism and the environment, as well as the economy.

As a result, asking questions about what and how much to consume is important. To come up with more meaningful answers, consider consumption’s history: where it came from, how it grew and how consumers behave. Listen to the viewpoints of consumption’s critics and its champions. Ask if consumption is a threat to individuals and society, conjuring up ephemeral desires and promoting conformity. Or, as its proponents contend, is freedom of choice in the marketplace the bedrock of democracy and prosperity?

The Roots of Consumption

The history of consumption has greater breadth...