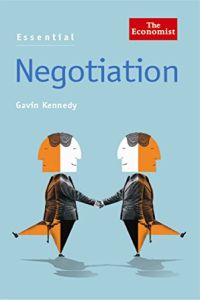 In the case of this often amusing, alphabetically organized (well, mostly), cross-referenced guide, a dictionary is as instructive as a textbook – although, because of their brevity, some of the definitions are confusing. Gavin Kennedy provides a basic introduction to the topic, then lets his definitions do most of the heavy lifting. He adds a dimension by providing examples from years of real-world experience. The book also stands out because of its European perspective: An appendix lists Europe-based negotiating consultants and trainers. Because of its unusual structure, this text will serve both novices, who should probably read it from beginning to end, and experienced negotiators, who can dip into it when they need a reference book to remind them of key terms, strategies and ploys.

Gavin Kennedy is a professorial fellow at Edinburgh Business School and the author of several books, including Everything is Negotiable and The Perfect Negotiation.

Negotiation is a defining human trait and an essential element of human social interaction. People are interdependent. To keep the wheels of commerce and social interaction turning, they must maintain good relations with one another. When they face conflicts, negotiating enables them to arrive at a mutually beneficial outcome. Thus, people negotiate constantly, over large and small issues alike, from where to go on vacation to the delineation of international boundaries.

Negotiation plays an important role in history, since it can replace violent behavior. Talking over a conflict usually has better results than combat. In war, the victor confiscates the assets. In negotiation, however, both parties gain access to valuable resources. Everyone walks away with something positive. And unlike war, which often exacerbates the hostility between the parties, negotiating produces a new basis for social relationships. As Winston Churchill said, “Jaw jaw is better than war war.”

Some people criticize negotiating because they believe both sides must give up something to achieve progress and stability. However, while such negotiations do occur, ...