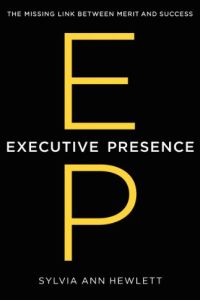 In the words of one Wall Street CEO, “I can’t describe it, but I sure know it when I see it.” Most people intuitively recognize “executive presence” (EP). It’s a rare combination of vision, charisma, drive and intelligence that marks great leaders. Workplace expert Sylvia Ann Hewlett breaks EP into its three parts – “gravitas, communication and appearance” – and reveals the secrets to attaining all three. Hewlett’s guide is chock-full of examples set by impressive leaders, and she outlines blunders to avoid and strategies to get ahead. getAbstract recommends her insights and tactics to anyone aspiring to or currently holding a leadership position.

Sylvia Ann Hewlett, an expert in gender and workplace issues, founded the Center for Talent Innovation think tank and wrote Off Ramps and On Ramps and Winning the War for Talent in Emerging Markets.

What makes for dynamic, engaging and effective leaders? Being able to convey that you’re in charge – just by walking into a room – requires a unique blend of self-possession, charm and authenticity. This is executive presence (EP), and great leaders, such as US president Barack Obama and the late British prime minister Margaret Thatcher, have it, as does actress Angelina Jolie, Facebook’s Sheryl Sandberg, Virgin’s Richard Branson and Olympic sprinter Usain Bolt. Executive presence isn’t something you’re necessarily born with, but you can develop it.

The author’s research firm, the Center for Talent Innovation, conducted several studies, including focus groups, interviews and an extensive national survey to identify the qualities that make up executive presence. The three elements of EP, while not of equal weight, remain consistent across different fields and contexts. They are:

About two-thirds of the senior executives surveyed rated gravitas as the most important ingredient in EP. Every great leader has gravitas. After the 2010 BP oil spill in the Gulf of Mexico, BP managing director Bob Dudley projected...