Summary of Extreme You 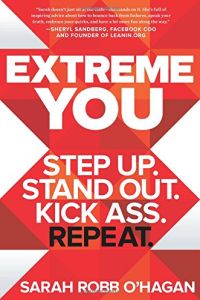 Veteran executive Sarah Robb O’Hagan dreamed of achieving spectacular success, but her life didn’t always unfold that way. She succeeded in many ways, but she also faced failure at times in her career as an executive at Virgin Atlantic, Nike, Gatorade and Equinox. Now CEO of the indoor cycling company Flywheel Sports, she says that when you face obstacles, you must make a choice: Stick to the beaten track or strike out on your own. If you choose the conventional route, you may pay the price of ignoring much of what makes you unique. O’Hagan – a wife, mother and endurance athlete – urges you to make the courageous choice to use your unique strengths to become the “Extreme You.” getAbstract recommends her lively, thought-provoking motivational manual to businesspeople seeking inspiration and even an alternative approach to leadership.

Sarah Robb O’Hagan was an executive at Nike and Virgin Atlantic. She later became the global president of Gatorade and president of the luxury fitness company Equinox. Now she’s CEO of Flywheel Sports, an indoor cycling company. For much of her life, O’Hagan reports, her performance was mediocre. At times, she says, she failed spectacularly.

When O’Hagan met successful people like Apple senior vice president Angela Ahrendts, skier Bode Miller and former US secretary of state Condoleezza Rice, she found that they had succeeded because they accepted every aspect of themselves, positive and negative. They took chances and pressed ahead even if things didn’t go well initially. They worked hard to outdo everyone around them, and yet they remained humble. These “Extremers” climbed as far as they could by drawing on the traits that made them unique. To create your “Extreme You,” excel in ways that only you can, based on your unique abilities, personality and strengths.