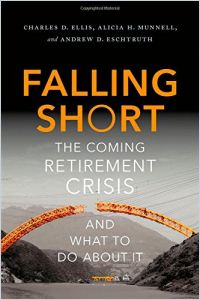 Retirement should be a carefree time when retirees can savor life without worrying about paying the bills. But your retirement won’t be so savory unless you plan for it and put money aside. Unfortunately, many people make no financial preparations for retirement. With skyrocketing health care costs, longer life spans and the elimination of corporate pensions, an unplanned retirement can mean years of struggle. Retirement specialists Charles D. Ellis, Alicia H. Munnell and Andrew D. Eschtruth examine the current and future state of retirement in the United States and offer sensible recommendations for how the government and American employers and workers can address retirement more effectively and create a proper retirement system with the right planning and preparation. Everyone must plan for his or her senior years, and the authors provide an excellent primer. getAbstract recommends their informative report to organizations, employees and policy makers.

Charles D. Ellis chairs the Whitehead Institute and has written 16 books. Andrew D. Eschtruth is associate director at the Center for Retirement Research at Boston College where Alicia H. Munnell teaches in the Carroll School of Management. A former member of the President’s Council of Economic Advisers and a former assistant secretary of the Treasury, she spent 20 years at Boston’s Federal Reserve Bank.

The “‘Golden Age’ of Retirement Security”

During the late 20th century, many US workers could quit their jobs at 65 and enjoy a financially secure retirement. These people benefited from US government entitlement programs established for senior citizens. About half of the American private-sector workforce also received pensions from their employer. Their firms handled the vexing financial decisions, such as how to invest for the long run. These retirees left the workforce between 1980 and 2000, a period now thought of as the US’s golden age of retirement.

The combination of pensions and monthly Social Security checks provided these retirees with comfortable incomes. Many also had retiree health insurance from their former employers. They retired with full Social Security benefits at age 65 – now the full-funding age is 70. Married retirees received lucrative spousal benefits.

During these retirees’ senior years, Medicare paid most health care costs. With that, and their pensions, full Social Security at 65, health benefits and spousal benefits, retirees received a great deal. This propitious period was no accident. “Beginning at the turn of the century” big US...

This Is the Year I Put My Financial Life in Order
9
55, Underemployed, and Faking Normal
9
The Index Card
9
Good Business
8
Financial Freedom
8
How Population Change Will Transform Our World
8