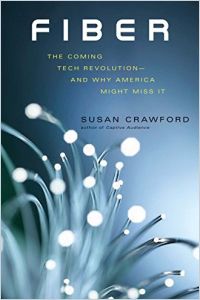 Harvard Law professor Susan Crawford likens fiber to electricity. If every home hadn’t connected to the electric grid last century, the United States would be poorer and weaker today. US leaders took charge back then, but have failed to enable the 21st-century equivalent of electricity – fast fiber – to reach every home. Certain US cities – Chattanooga, Tennessee, for example – built their own fiber networks despite resistance from entrenched monopolies and their bought-and-paid-for politicians. Meanwhile, rural Americans and the urban poor have little or no internet access, and the United States lags other developed nations in crucial technology and its applications.

The United States, once the infrastructure and technology wonder of the world, now lags below average in the most important technology of all, internet connectivity.

While nations including Singapore, South Korea and Sweden have brought high-speed fiber connections into virtually every home and business, the average American household crawls along the internet at frustratingly low speeds – while paying extraordinarily high prices for the privilege.

Fewer than 10% of US households enjoy fiber connections.

While fast fiber links the United States with other nations and connects states and towns, slow copper covers the “last mile” into people’s homes and small businesses, creating a massive bottleneck.

Entrenched and powerful business interests, plus political indifference and corruption, keep fiber out of the reach of most US households. The consequences go well beyond frustration when attempting to surf the web or stream movies. Low-speed or nonexistent internet connections rob children of the chance at an education on par with...

The Road to 5G Networks
8

5G vs 4G: What Is the Difference?
7
2020 Tech Trends Report
8
Reprogramming the American Dream
8
Tools and Weapons
10
How Science Beat the Virus
9