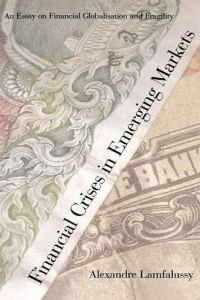 This slender, surprisingly thorough volume provides an insider’s view of four region’s storm-tossed financial crises (Latin America, ’82, Mexico ’94, Asia, ’98 and Russia ’98). Author Alexandre Lamfalussy, a key figure at the Bank for International Settlements during some of these crises, discusses the history of these events and the problems confronting crisis managers at the time. He lays out the critical background facts of each crisis and draws clear commonalties and contrasts among them. He also offers thoughtful, reasonable prescriptions for avoiding, minimizing and managing future crises. Then, he points out some little-discussed aspects of globalization in the developed world, which contributed to the crises. Though Lamfalussy’s style is dense and somewhat academic, his content is worth the work. getAbstract recommends this book as valuable reading (and a financial lifejacket) for anyone doing business or investing in an emerging market, for corporate executives working abroad and for public policy makers worldwide.

Alexandre Lamfalussy was president of the European Monetary Institute from 1993 to 1997. He has served as general manager of the Bank for International Settlements. He is now a professor at the Institute of European Studies at the Catholic University of Louvain.

Many developing countries have been hit by financial crises since the early 1980’s. Examining four major emerging market crises - Latin America (1982-83), Mexico (1994-95), Asia (1997-98) and Russia (1998) - offers a way to explore the impact of globalization on national and regional financial fragility.

This crisis, which began in Mexico in the summer of 1982, spread to most of Latin America and many other developing countries. The trauma arose from a huge increase in foreign debt and large current account deficits, both financed by banks reporting to the Bank for International Settlements (BIS). Western banks created a borrower’s market and hedged their risks by issuing variable interest rates.

When interest rates rose in the early 1980s, borrowers could no longer repay even their interest. A sudden flight of capital from Latin America, just as lending banks refused to renew short-term debt, triggered the crisis. Western officials instantly realized that a moratorium on debt repayment would threaten the stability of the Western banking system and granted emergency credits and large loans...