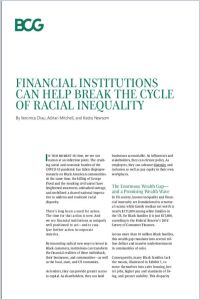 In this astute action plan for addressing the significant and long-standing wealth gap in America, industry experts Veronica Chau, Adrian Mitchell and Kedra Newsom point out how financial institutions can increase inclusion to reduce racial inequity. Firms can move forward on several fronts that span research, education, public policy, hiring and collaborations with community groups, as well as by channeling capital to Black-owned businesses. This cogent argument carries important insights for financial professionals.

Veronica Chau, Adrian Mitchell and Kedra Newsom are partners and directors at the Boston Consulting Group.

The disparity in wealth between white and Black Americans is vast.

Differences in financial security and income between white and Black households in America are massive. In 2016, the median net worth for a white family was approximately $171,000; it was a mere $17,600 for a Black family. Such a disparity amounts to several trillion dollars in total and highlights an extreme underinvestment in Black communities that leads to poor housing, insufficient employment opportunities, low wages and inadequate living standards.