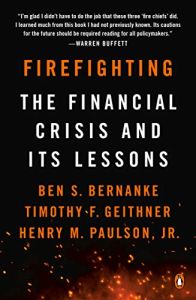 The Financial Crisis and Its Lessons

Ben Bernanke, Timothy Geithner and Henry Paulson – as Federal Reserve chair, New York Fed president and Treasury secretary, respectively – played prominent roles in the US government’s response to the 2008 financial crisis. In this ultimate insiders’ report, the three central actors are free to be more honest than they could be at the time they toiled to save the global economy, and they acknowledge that financial innovation had far outpaced the ability of regulators to oversee it. This three-way memoir offers a deftly written reminder of the bad old days of the crash.

Minor financial crises are a regular part of the American economy, but major meltdowns are rare.

In the decades after the 1930s Great Depression, US markets largely dodged severe disruptions. That streak ended in 2008, when a financial disaster upended the global economy, devastated the US housing market and sent unemployment soaring. A dangerous buildup of risky mortgage debt fueled the crisis. From 2001 to 2007, US households’ mortgage debt jumped more than 60%, far outpacing Americans’ income gains. Lax underwriting standards led to a spate of dubious mortgages, including “NINJA loans” that required no income, job or assets; “liar loans” that demanded no proof of income or assets; and “exploding ARMs,” adjustable-rate mortgages with tempting teaser rates that soon turned prohibitively expensive.

Lenders like Countrywide Financial embraced this new model of risky lending. They could dangle credit at aggressive terms because they didn’t keep the loans; instead, these lenders packaged and resold mortgages to investors. While many thought that Countrywide didn’t have enough “skin in the game,” the company collapsed because...

Why is the New Zealand government telling its central bank to focus on rising house prices?
8