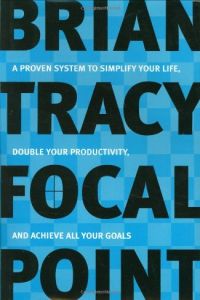 Why are some people more successful than others? The true secret of high achievers, contends Brian Tracy, is their ability to find their focal point, the one thing they should be concentrating on in order to attain maximum results. In what amounts to a user’s guide for self-improvement, Tracy encourages readers to critically analyze their lives in seven key areas and shows them how to develop workable, effective goals and plans in each area. getAbstract.com recommends this book to all who seek to maximize their personal effectiveness, their potential income and the intangible but lasting returns of a life well lived.

Brian Tracy is Chairman of Brian Tracy International, a leading consulting and development firm with affiliates throughout the United States and in 31 other countries. His client list of more than 500 corporations includes such blue chips as IBM, McDonnell Douglas, and Arthur Andersen. He has written more than a dozen books, including The 21 Success Secrets of Self-Made Millionaires, The 100 Absolutely Unbreakable Laws of Business Success, and the acclaimed Maximum Achievement. He lives in Solana Beach, California.

Not too long ago, a nuclear power plant was experiencing a serious technical problem. As a result, energy generation was reduced and the efficiency of the entire operation was severely compromised. The plant’s engineers were totally stymied and unable to identify (let alone solve) the problem. Finally, management imported one of the nation’s top consultants on nuclear power plant construction and engineering and turned him loose on the problem.

For the next couple of days, the consultant walked around in a white coat, peering at the hundreds of gauges and dials in the control room, scribbling notes and calculations. At the end of the second day he uncapped a black felt-tip marker, climbed a ladder, and placed a large, black "X" on one of the gauges. "This is the problem," he explained. "Repair and replace the apparatus connected to this meter, and the problem will be solved."

After the consultant had turned in his white coat and departed, the engineers followed his advice, and sure enough, he had isolated the problem - the plant was shortly back to operating at full capacity. About a week later, the plant manager received a bill for $10,000 "for services...