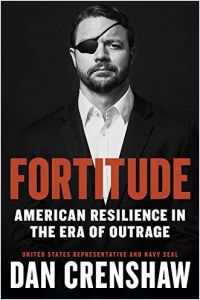 Texas congressman Dan Crenshaw – a former Navy SEAL wounded while serving in Afghanistan – draws on his experiences and the examples of his heroes to argue for resilience and courage. He sees much of the discord within the United States as an identity crisis caused by what he calls “outrage culture.” Crenshaw pushes back against those who see injustice everywhere they look and respond with perpetual rage. Instead of resorting to hyperbole and fabrication, he uses logic to advocate a conservative viewpoint. Even if you disagree, you may appreciate his call for high standards of behavior and his efforts to have calm discussions about tough issues.

Republican Dan Crenshaw served in the Navy SEALs for a decade and was elected to the United States House of Representatives from Texas in November 2018.

Dogged and determined, Washington led America’s fight for independence from the British. Shortly before the end of 1776, his Continental Army faced annihilation. The tattered American rebels had suffered repeated defeats, with the British pushing them out of Long Island, Manhattan and Westchester, New York. By Christmas Eve, the English commanders believed the battle-weary, outgunned and outmaneuvered Americans, freezing in the winter weather, would soon give up.

Abandoning the New York City region, the remnants of the Continental Army fled from the British forces across New Jersey, ending up on one side of the Delaware River. The English Army was on the other...