Summary of From Airline Reservations to Sonic the Hedgehog 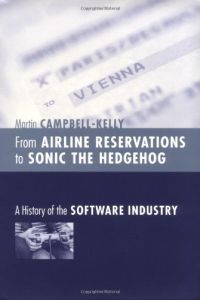 From Airline Reservations to Sonic the Hedgehog may sound like a mystifying title, but this book provides a reasonable overview of the history of the software industry. At times, given the ups and downs in the industry, it can’t avoid sounding like a catalog of defunct firms and obsolete software. However, this chronology is quite useful for anyone who wants to come up to speed very quickly and very generally on the main trends in the industry. Author Martin Campbell-Kelly covers some of the industry’s seminal events and the main categories of software. Vexingly or refreshingly, he takes pains to say as little about Microsoft as possible, making it clear that others have written enough on that subject. So, with that absence duly noted, getAbstract.com recommends this book to those who want an inside history of the software industry, from massive mainframes to little blue cartoon porcupines.

Historian Martin Campbell-Kelly of University of Warwick is also the author of Computer: A History of the Information Machine, The History of Mathematical Tables: From Sumer to Spreadsheets and An Introduction to Macros. He edited Passages from the Life of a Philosopher and The Works of Charles Babbage.

In January 1952, a Fortune magazine article entitled "Office Robots" discussed the growing acceptance of computers by business and government. It didn’t mention software. It didn’t use the word "programming," but it referred vaguely to "flipping a few switches" in order to change the job a computer was doing. For the next half-century, except for a couple of feature articles, the general press ignored the software industry. Yet, by 1999, it was the fourth-biggest sector in the United States economy, and PriceWaterhouseCoopers analysts predicted that it would soon contribute more to the U.S. economy than "all other manufacturing groups." Fifty years ago, software hardly existed. Now it pervades our lives, at work and at home. How did this come to be?

The public at large more or less understands most other industries. For example, people have a general sense of how cars are made and sold, and while this understanding may be inaccurate in its details, it’s not far from the truth. That isn’t the case with the software industry.

From its beginnings in the mid-1950’s, the software industry evolved into three major sectors...