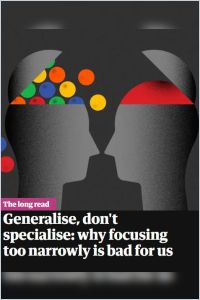 As children, we were told that practice makes perfect, but sportswriter David Epstein turns on its head the popular idea that specializing early on in one field leads to greater success. Epstein delved into studies on the development of elite professionals, observing that dabbling isn’t the hindrance many believe it to be. In this fascinating article, he outlines a convincing case that – in an increasingly complex and interconnected world – the world needs more “people with range.”

Award-winning writer David Epstein is the New York Times best-selling author of The Sports Gene: Talent, Practice and the Truth About Success. This article is adapted from his number one New York Times bestseller, Range: Why Generalists Triumph in a Specialized World.

It’s a myth that having a head start in one field makes you more successful.

One of the greatest golfers in history, Tiger Woods was a child prodigy who swung his first golf club at 10 months old, and beat his father when he was eight years old. Tennis champion Roger Federer famously sampled many sports, including soccer, squash, basketball and swimming, before choosing tennis in his late teens. The contrast between them – one who undertook intense “deliberate practice” epitomizing the concept of the 10,000-hour rule and the other with development unhindered by a late start – finds echoes in the world of sport, science, technology, business, music and the arts. The 10,000-hour rule has become mainstream, but there are just as many examples echoing Federer’s story.

The myth of starting and focusing early is part of a “well-meaning marketing machine,” but there are many instances of athletes who subvert it, including Czech athlete Ester Ledecká, who won gold medals in two different sports...

Range
8
Why Generalists Will Triumph Over Specialists in The Future of Work
8
When Evidence Says No, but Doctors Say Yes
8
The Sports Gene
9

What Olympians Can Teach the Rest of Us About Performing Under Pressure, According to a Sports Scientist
7
Olympic Icon Flo Jo Raced to the Top and Took Us with Her
8
Gen Z Trends Report
9
More Than Just Weather and Music
7
‘Angels’ in Hell
8
Prime Mover
8