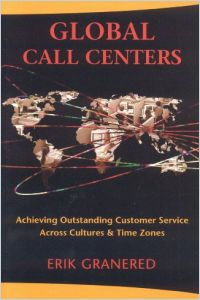 Author and educational consultant Erik Granered makes a sincere effort to bridge the divide between two distinct bodies of business expertise: what it takes to establish an offshore outsourcing endeavor and what it takes to operate a successful call center. This is a unique volume because it appeals to the strategic concerns of both corporate decision makers and call center executives on the front lines. Overall, however, Granered concentrates more on practical applications than on strategic matters. He acknowledges correctly that his treatment of broad cultural issues may sometimes sound simplistic. Even so, getAbstract considers Granered’s book to be a useful addition to any library on offshore outsourcing and strongly recommends it to managers and executives who are interested in outsourcing or call centers, or both.

Erik Granered is a former developer and trainer with an international company’s European, Middle Eastern and African customer service operations. He is a consultant for Corporate University Enterprise, Inc., an educational consulting firm in Falls Church, Virginia.

The trend to offshore outsourcing addresses the classic business need to make your company leaner, faster, more flexible, more profitable and more efficient. If hiring an outsider for a task that was previously exercised in-house will save your firm money, you have to consider it strongly. If you don’t trim down, cut expenses and reflect the savings in your prices, your competitors will. A firm can outsource a variety of different tasks, but call center operations are among the most common since most companies view them as less important cost centers.

Call centers in the United States. employ 2.8 million people, so the stakes are high. McKinsey Global Institute estimates that offshoring – that is, outsourcing to companies abroad – will increase 30% to 40% a year for the next several years. Some 3.3 million US jobs and $136 billion in wages could be exported to China, India, Russia and other nations by 2015. Offshore outsourcing’s economics are simple. In overseas locations, wages may be only a tenth of US wages, and skilled employees abound. University graduates in developing nations embrace call center jobs.