Summary of Gods of Management 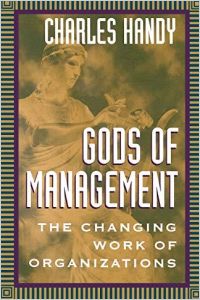 Philosopher Charles Handy compares today’s dominant management styles to the qualities of four mythological Greek gods. Drawing archetypal inspiration from Zeus, Apollo, Athena and Dionysus. Handy breaks down the subtle differences that inform competing approaches to management. He argues that today’s managers face making the transition from a hierarchical corporate Apollonian culture to a more diverse, democratic one. In this evergreen business classic, Handy posits that increased complexity and individualism will fuel a reign of new managerial gods.

The ancient Greeks saw their gods as more than theological deities. Each god represented specific interests and values. People decided which gods they would serve according to their sense of alignment with each deity’s symbolic emphasis. Today, leaders can choose among four different management styles and corresponding corporate cultures represented by the mythological gods Zeus, Apollo, Athena and Dionysus.

Use the power of these Greek-god-inspired cultures to help you navigate different contexts:

The Age of Paradox
8