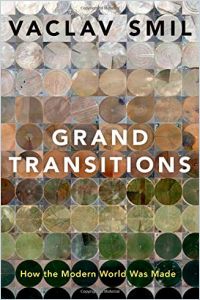 Today’s world is the result of four “grand transitions,” environmental scientist Vaclav Smil states. In this numbers-driven chronicle of major transitions in energy, agriculture, the economy, demographics and the environment over the past 250 years, Smil provides balanced arguments about both benefits and costs. These transitions, he writes, produced a safer, healthier and richer world for at least half the planet’s population, but also led to environmental destruction. It’s an important account, though some readers may feel Smil’s strong focus on data detracts from his narrative.

Emeritus professor Vaclav Smil is one of the world’s foremost experts on energy and other critical components of the global economy.

Modern nations experienced five major transitions over the past centuries that improved quality of life – but not without consequences.

Five foundational transitions – in demographics, farming, power, the economy and the environment – explain today’s high quality of life, as well as threats to continued prosperity. These mega-shifts created both abundance and undesirable side effects, and will determine the fate of life on Earth in the decades to come.

Life improved dramatically post-mid-19th century, particularly in developed nations. The transition from low-yield agriculture to massive-scale farming and fertilizer use, for example, brought an end to the famines that plagued premodern societies. At the same time, however, the demographic shift toward aging populations in affluent nations, the still-exploding growth in poor countries and the mounting cost of two-and-a-half centuries of expanding human impact on the environment might make life difficult for billions of people.

Almost half of the world’s nearly eight billion people live in societies that have yet to complete the...