Summary of Hacking the Code of Life 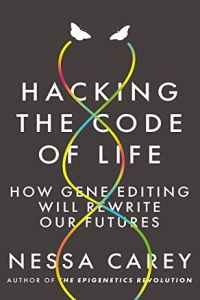 The breakthrough in gene editing known as CRISPR may offer cures for genetic disease, new treatments for cancer, and healthy new food crops that are resistant to pests and droughts. This raises fears of a new eugenics or an ecosystem catastrophe. British biologist Nessa Carey provides a concise guide for laypeople to the history and mechanics of gene editing and outlines its promise in agriculture and medicine. Her basic approach makes for a quick, easily digestible introduction to this burgeoning field.

British biologist Nessa Carey, PhD, is a visiting professor at Imperial College, London, specializing in molecular biology and biotechnology. Her other books include The Epigenetics Revolution and Junk DNA: A Journey Through the Dark Matter of the Genome.

The latest gene-editing techniques will transform the biological sciences.

In 2012, scientists unveiled a new genetic-modification technique that could revolutionize science and propel major advances in medicine and agriculture.

With this new technology, scientists can modify the genome of organisms with unprecedented precision. Compared with previous techniques, the new gene-editing technology is fast, cheap and easy to use.

Long before people knew what genes were, they crossbred plants and animals to increase their desirable traits.

In the 19th century, Gregor Mendel undertook the first systematic efforts to understand the mechanisms that underlay breeding. Mendel performed extensive experiments in crossbreeding pea plants and recorded the results. He speculated that what he termed “invisible factors” must govern how organisms passed traits to their offspring. Decades later, botanist Wilhelm Johannsen named these invisible factors “genes.” Scientists didn’t know what genes were made of until 1944, when Oswald Avery determined that the construction material...