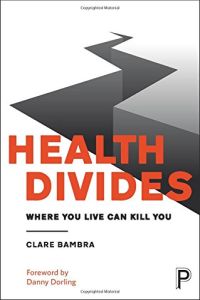 Durham University professor Clare Bambra offers an in-depth analysis of how the politics and economics of the place you live in influence your health. She explains why health inequalities exist both among nations and within them. Bambra examines such inequalities past and present, and details their ubiquitous, longstanding nature. Reducing them – and making people’s lives safer and healthier – will require vast changes in political and economic priorities. In other words, “where you live can kill you,” but often it’s death by politics. getAbstract recommends Bambra’s report to forward-thinking leaders and public health advocates.

Dr. Clare Bambra is professor of public health geography and director of the Center for Health and Inequalities Research at Durham University. Her research focuses on health and welfare systems and the role of public policies in reducing health inequalities.

A Relationship Between Place and Health

Health inequalities exist between and within rich and poor nations, including wealthy nations like the United States and the United Kingdom. England has a health divide between the north and the south – which enjoys better health – since the dawn of the Industrial Revolution. Scotland has an east-west divide. The US and China have north-south disparities.