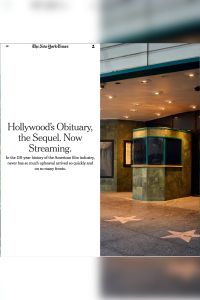 Hollywood has survived serious threats over its 110-year history: the advent of television; consolidation and conglomeration; and tent-pole franchises created to sell merchandise. Then, Netflix started its streaming service in 2007, putting Hollywood on the defensive as new technologies threatened its dominant business model. Then, the COVID pandemic shuttered theaters. So, will the theater-going experience still define movie-watching in the future? New York Times reporter Brooks Barnes delves into the sea of adversity plaguing Hollywood to take the pulse of the dream-making industry.

The news of Hollywood’s demise has been greatly exaggerated many times during its 110-year history. Producers feared for the industry’s future with the introduction of television, the age of conglomerates and the super-franchises tied to merchandising. But the industry has always made a comeback and has always proven its cultural relevance – as it did with titles like Get Out in 2017 and 1917 in 2019. But now, facing stiff competition from deep-pocket streaming services on the one hand and a pandemic that keeps people out of movie theaters on the other, Hollywood really might not make it.

Netflix introduced its streaming service in 2007. In 2017, Disney bought most of 21st Century Fox for $71.3 billion from Rupert Murdoch. With that purchase, Disney vastly expanded its library and established a majority share in Hulu, a streaming service.

In 2020, a number of companies accelerated the shift to streaming. Big screen productions now premier ...

When Will We Want to Be in a Room Full of Strangers Again?
8
How Marketers Can Win with Gen Z and Millennials Post-COVID-19
8
How Mariah Carey Built All I Want for Christmas Is You Into a Holiday Juggernaut
8

Smarter COVID-19 Decision-Making
9
Facebook Will Now Let Some Employees Work from Anywhere, but Their Paychecks Could Get Cut
7