Summary of Hope and Other Superpowers 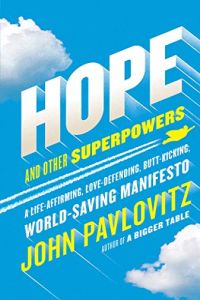 When you’re a kid, you’re full of positive expectations, but that shiny hope may tarnish as you mature and your possibilities seen to narrow. Pastor John Pavlovitz wants you to hark back to your youthful optimistic beliefs in caring and helping the world heal. He says “ordinary superhumans” can spread goodness and create profound transformation with small acts of kindness, and he urges you to be such a person. One precaution: Pavlovitz makes frequent, strong political comments – and he’s not at all a fan of President Trump – so his counsel isn’t for everyone. However, as he calls on readers to take personal action to do good in the world, he also offers inspirational self-help advice.

John Pavlovitz, the pastor at North Raleigh Community Church in North Carolina, blogs at Stuff That Needs To Be Said.

All superheroes have an “origin story” that describes the moment they decided to do something extraordinary with their powers.

Peter Parker became Spider-Man when a radioactive spider bit him. But you don’t need a spider bite to motivate you. Just remember the joy, optimism and feeling of infinite possibility you had as a kid, before the world wore you down with rejections, criticism and failure.

After Donald Trump won the 2016 presidential election, author and pastor John Pavlovitz received frantic calls from people who were in pain over the outcome. They inspired Pavlovitz to write a blog, which went viral, about their sense of loss. He realized his potential to help others who were struggling with the new political reality and, in the process, to help heal himself.

Pavlovitz “rejoiced in his trials” because adversity can reshape you in valuable ways. Use adversity to locate your compassion, creativity and generosity.

In the comics, superheroes hide behind alter egos, as Superman did with Clark Kent.

Many people remain unaware of the superheroes inside of themselves. What separates...