Summary of Hot, Flat, and Crowded 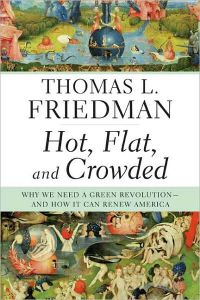 On the whole, this book resembles a televangelist’s Sunday morning sermon. It is full of passion, action and emotion. The “preacher,” The New York Times columnist Thomas L. Friedman, exhorts a congregation of true believers with a rousing endorsement of their shared faith, hitting all the familiar themes, stories and touchstones, plus a heartfelt environmental alert. Even for nonbelievers, the spectacle is impressive. Friedman is a skilled coiner of phrases and he sure can work a crowd. To judge by the many interviews and conversations referenced in this book, he has gone to great effort to assemble a corpus of evidence in support of his argument. Baldly put, his message is that conventional wisdom about global warming is true: Because of irresponsible consumption, the world faces an environmental catastrophe of unprecedented magnitude. He explains that George W. Bush’s administration was unconscionably negligent in this crisis, that most honest scientists agree something must be done, and that climate change deniers are mostly hirelings in the service of the oil industry or ideological conservatives unwilling to face facts. For any reader reasonably acquainted with the news media, much of what Friedman says, though urgent, will be somewhat familiar. However, getAbstract notes, he always has a strikingly entertaining and persuasive way of saying it.

Three-time Pulitzer Prize-winner Thomas L. Friedman is a foreign affairs columnist for The New York Times, a winner of the National Book Award, and the two-time winner of the Overseas Press Club Award. His books include the bestseller The World Is Flat.

In Istanbul, walls, guard booths, security barriers, and bulletproof doors and windows surround the American Consulate, located roughly 12 miles from downtown. A captured terrorist involved in an attack on the city’s British Consulate told police that his group had scouted the US Consulate but gave up hope of attacking it. “It was so well guarded they don’t even let birds fly there,” he said.

America has walled itself off from the rest of the world. It has also walled itself off from rational thinking about such important challenges as global warming. Oil and car companies have had too great a voice in impeding laws and policies that could have made the world a better, cleaner place. Now the US must help the world solve one of history‘s gravest crises.

The world is entering the energy-climate era. Greater global demand is focused on dwindling supplies of resources. Easy oil money is keeping repugnant regimes in power. The climate change, “energy poverty” and species extinctions that threaten biodiversity all require innovative ideas, action and infrastructures. The countries that invent the tools and industries...