Summary of How High Will You Climb? 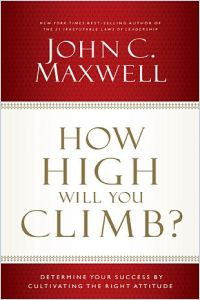 Motivational author John Maxwell’s warm, insightful book highlights the need for people to focus on something they unknowingly ignore: their attitude. All too often, people examine how they should act without examining their underlying point of view – the attitude that determines their relationship to life. Maxwell combines spiritual inspiration drawn from the Bible and Christianity with information on how to adjust your attitude. Though many of Maxwell’s easy-to-read motivational books are nonsectarian, he is a pastor and his Christian beliefs dominate here. getAbstract recommends his accessible ideas to anyone seeking a religious path to a boost in attitude.

The Impact of Attitude

Your attitude influences the mood of the people around you. Think back to a meeting in which someone became excessively negative, and consider how that attitude spread throughout the room. By contrast, remember how much better you felt when a friend showed concern or affection for you.

The Bible says that when King Saul felt despondent, he would call for David. His friend’s presence and harp music made Saul feel less sad. Psalm 34 illustrates...