Summary of How the Energy Transition Will Reshape Geopolitics 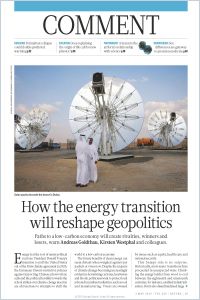 Whether your car runs on gas or electricity, or whether the power that comes out of your socket is solar or coal-generated, may be inconsequential to the end-consumer, but they can have a huge impact on the countries that supply the raw materials. In a series of meetings funded by the German Foreign Office, an international team of researchers discussed the ways in which the global energy transition will impact international peace and security. Four scientists who took part in the discussions share the main conclusions of the meetings in the journal Nature. Policy makers and anybody involved in the climate debate will want to learn how the energy transition can be used to promote a more peaceful and equitable world.

Andreas Goldthau is professor of international relations at Royal Holloway, University of London, UK. Kirsten Westphal is senior associate in the Global Issues Division at the German Institute for International and Security Affairs (SWP), Berlin, Germany. Morgan Bazilian is director of the Payne Institute and a professor of public policy at the Colorado School of Mines, Golden, Colorado, USA. Michael Bradshaw is professor of global energy at Warwick Business School, University of Warwick, Coventry, UK.

The transition to renewable energy will have geopolitical consequences.

Although a systematic analysis of the geopolitical impact of a global transition away from fossil fuels does not yet exist, it’s possible to gauge the issues that will be at play. For example, an increased sense of urgency to mitigate climate change in the face of extreme weather events will exacerbate domestic pushback against radical climate action by fossil fuel-dependent industries and regions. Voters may be easily distracted from climate concerns by issues affecting their daily lives, such as health care.

Meanwhile, plummeting demand for fossil fuels will weaken oil-exporting countries both economically and politically. Competition between global leaders in clean energy, China and the United States, will likely intensify. Finally, the increased use of agricultural land for energy production could lead to food and water shortages.

The international community, led by the G20, could agree on a global climate and “green globalization” policy. A “big green deal” won’t come cheap for wealthy nations, who would be required...

A Crash Course on Climate Change
7
How China Could Be Carbon Neutral by Mid-Century
8
The Technological and Economic Prospects for CO2 Utilization and Removal
8
Is It Too Late to Stop Climate Change?
8
Explainer: Nine ‘Tipping Points’ that Could Be Triggered by Climate Change
8
Symphony in C
9