Review of How to Save the World For Free 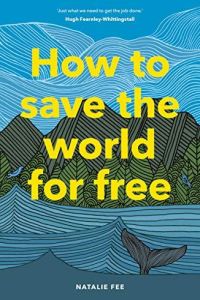 Corporations advertise to make you feel bad about yourself so you’ll buy more stuff. Stop buying stuff and be happy anyway, says environmental activist Natalie Fee. She suggests hundreds of ways you can thrive and protect the planet, showing people who care about the Earth’s future the steps they can take to live their values. Her short, smart book packs a wallop. She outlines environmental problems and lists ways you can make a difference. Governments must bring massive resources to bear on climate change, but your actions help. Start with the steps that fit your life, and build your fight against environmental devastation.

Natalie Fee is an environmentalist and founder of City to Sea, a UK nonprofit to stop plastic pollution.

Each year, plastic kills 100,000 marine animals and one million birds. Cut down on plastic waste by carrying a reusable water bottle.

Fee begins with basic facts: oceans cover 75% of the Earth and generate 70% of the atmosphere’s oxygen, regulate the planet’s temperature and provide three billion people with food. Since 1965, humans have produced more than eight million tons of plastic, mostly for one-use packaging. The material in straws, plastic lids and coffee cups breaks down into microplastic particles and lasts forever. These particles, Fee laments, appear in every part of the ocean, in seafood and even in salt. She tells you to avoid single-use plastics. Filter your tap water, instead – and you’ll save money. Bring your own cup when you buy coffee. Use paper straws.

Fee cites water bottlers, who convince you their water is better than the water that comes from your tap, for fomenting the crisis of plastic bottle waste. Lawmakers could pass bills requiring caps that remain attached to bottles, and they could implement a deposit scheme to encourage recycling – but the gas-fracking industry makes a fortune manufacturing plastics.