Summary of In An Uncertain World 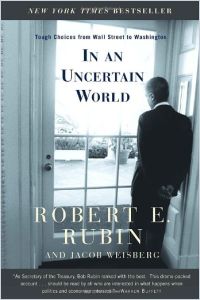 Robert Rubin, Treasury Secretary in the Clinton Administration, believes in studying probability and risk. To him, uncertainty is part of life. Therefore, his inside look at the Clinton presidency and its global financial policies is carefully considered. He admits his mistakes and recounts his efforts and his successes. He offers tremendous insight on how the U.S.’s top leaders rescued other countries from financial quagmires, and he sounds an important alarm about the disconnect between the country’s growing dependence on global trade and its public lack of support for world economic relationships. Rubin carefully walks the line between being self-serving and providing sharp insights. He doesn’t offend the Clintons, though he presents events and himself - for this has an autobiographical side, as well - with apparent candor and honesty. He hasn’t taken a lot of risks here, but that could reflect his experience. After all, Wall Street might be nearly as cutthroat as Washington. getAbstract highly recommends his book for its exploration of the Clinton presidency, its insights into fiscal policy making and its understanding that a nation’s economic fate doesn’t stop at its borders.

Robert Rubin rose to fame as U.S. Treasury Secretary in the Clinton Administration from 1995 to 1999. A graduate of Harvard University and Yale Law School, he joined Goldman Sachs after his first law firm job. Talented at risk arbitrage and stock option trading, he spent 26 years at the firm, eventually becoming co-chairman. In 1993, he became director of the White House National Economic Council. Rubin resides in New York City with his wife and two sons, and serves as a director and Chairman of the Executive Committee of Citicorp. Jacob Weisberg wrote In Defense Of Government, and is the editor of Slate.

The First Crisis of the Twenty-First Century

When Robert Rubin was sworn in as Secretary of the Treasury on the evening of January 10, 1995, his honeymoon period lasted about a minute. No sooner were the formalities over than he and the Treasury’s top international official, Larry Summers, sat down with President Bill Clinton in an emergency meeting about Mexico.

Rubin had finished putting the details of a rescue plan together with Federal Reserve Chairman Alan Greenspan only a few hours earlier. The new Secretary explained that the Mexican government hovered on the edge of bankruptcy. Rubin and Summers recommended a massive economic rescue - what the media would term a bailout - of billions of dollars to help the Mexican government stave off default, currency collapse and economic disaster.

Rubin realized the proposed rescue would probably not delight American taxpayers. However, the consequences of a Mexican default were much more profound than generally realized. If Mexico defaulted on its commitments to other nations, capital would flee the country, which would suddenly be perceived as a very risky place for investment. As a result, the peso probably would...