Summary of In Spite of the Gods 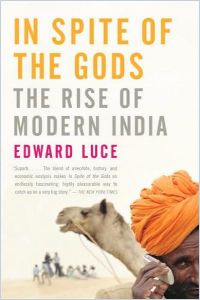 getAbstract recommends this excellent, well-written work of reportage on India. Edward Luce provides a colorful, striking picture of the country and its unconventional path to development. Within the past several years, numerous books have been published about so-called “Chindia,” the phenomenon of the economic emergence of the two most populous nations on earth. Luce makes it very clear that categorizing India with any other place, including the ever-intriguing China, is probably analytical and intellectual sloth. India presents such overwhelming, bewildering complexity that onlookers must take it on its own unique terms.

Edward Luce, Washington bureau chief for The Financial Times, was its South Asia bureau chief from 2000 to 2006. From 1999 to 2000, he was a Clinton-administration speechwriter.

The notion that India has a unique spiritual destiny has exercised a powerful pull on Westerners for hundreds of years. For the most part, Indians themselves have been content to accept this stereotype. After all, it beats Winston Churchill’s dismissive judgment of India as “a beastly country with a beastly religion.” However, spirituality itself has contributed to India’s poverty.

After Gandhi was assassinated, India’s first prime minister, Jawaharlal Nehru, put the country on a secular, socialist development path. The legacies of Nehru’s socialism included capital-intensive industries that did little to solve India’s employment problems, a complex regulatory structure that...