Summary of Innovate the Pixar Way 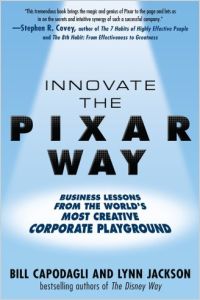 Despite a blue-sky tone, this book offers a fascinating window into the singular culture of Pixar, the world’s foremost animation studio. Management consultants Bill Capodagli and Lynn Jackson balance their accounts of technological advances, cutthroat corporate politics and astonishing profits with descriptions of Pixar’s arcane approach to strategy and human resources. The tale of how Pixar’s leaders exercise their determination to run the shop their own way – while standing up to interference from Disney, their corporate parent – injects narrative drama into this straightforward presentation of Pixar’s in-house philosophy. Its leaders’ willingness to accept failure, and their faith in their own judgment about products and people, prove inspiring. The lessons offered at the end of each chapter err toward the simplistic and don’t usually demonstrate how conventional businesses might apply Pixar’s methods. Instead, the authors mostly leave extrapolation of Pixar’s business teachings to the reader. A lengthy index citing other companies that thrive under a “fun” matrix helps make up for that shortcoming. getAbstract finds that those examples, plus revealing quotes from Pixar executives, will enable readers to emulate Pixar’s strategy as they enjoy this inside-the-theatre corporate profile.

Pixar Studios’ co-founder Ed Catmull and early hire John Lasseter, now Chief Creative Officer, have worked together as partners since 1984. Their fundamental credo is to retain the “childlike wonder” most adults lose. As Lasseter says, “People who get into animation tend to be kids. We don’t have to grow up.”

Pixar emerged from an unusual confluence of interests: Computer animation geeks who wanted to be comic book artists connected with software entrepreneurs who wanted to be rich. Pixar’s engineers and its creative staffers understood from the beginning that the future lay in the machines and programs they discovered, learned or invented, but nobody knew what that future would look like. Under Steve Jobs’ early ownership (he bought Pixar from Lucasfilms in 1986; Catmull’s co-founder Alvy Ray Smith left in 1991), Pixar primarily attempted to sell expensive graphic-generating computers. Management regarded movie making as a hobbyist sideline.