Summary of Irony and Outrage 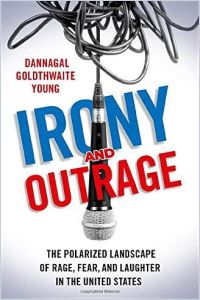 Looking for a viewer’s guide to both cable news and to political satire shows? In this intriguing analysis of political media, Dannagal Goldthwaite Young delves into the strikingly different television content viewed by American liberals and conservatives. Liberals drink from a fountain of satire delivered by Jon Stewart and his descendants, she reports, while conservatives dine on a smorgasbord of outrage from Rush Limbaugh and Fox News. Young delves into the roots of both sides’ tastes, while also sampling scientific research that suggests a distinct brain physiology for each group.

Dannagal Goldthwaite Young is a professor of communications at the University of Delaware. She performs monthly with a Philadelphia-based improv comedy troupe.

Liberals do comedy, conservatives do outrage, and never the twain shall meet.

In the past decade of rising polarization within the American political landscape, two truths emerged. First, conservatives just aren’t good at satire. Jon Stewart, John Oliver, Trevor Noah and other satirists who enjoy mass acclaim have approached politics from the left. When conservative media tried to jump on the ideological comedy train, the result – Fox’s 1/2 Hour News Hour – was a flop.

Second, liberals aren’t good at fueling the outrage that sustains talk radio and ideological TV stars such as Glenn Beck, Rush Limbaugh and Sean Hannity. Air America, liberals’ answer to the right’s outraged talking heads, didn’t last. The explanation? America’s liberals and conservatives have different perspectives and divergent tastes – and those who wish to tap each group’s outrage can only do so through distinct means.

The gap in cultural taste between the left and right has existed for decades.

As the placid, prosperous 1950s gave way to the tumultuous 1960s, Americans faced a choice with regard to how to process shifting...

The Red and the Blue
8
Divided Politics, Divided Nation
8
Rethinking Polarization
8
When Words Trump Politics
9
What You Should Know About Politics . . . But Don’t, Fourth Edition
7
Uncivil Agreement
8