Summary of Is There Anything Good About Men? 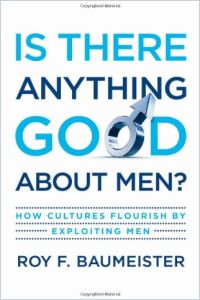 Sociologist Roy F. Baumeister just might convince ardent feminists with his fascinating, well-researched and deftly written book about the bum rap men receive simply for doing what their culture wants and needs them to do. Baumeister relies on research and his own theories to describe how men created the culture that sustains and advances society. He makes an intriguing argument, filled with examples that support his hypothesis, which might make it go down a little easier for women, particularly when they learn that men are expendable. Still, many women – and maybe some men – likely will bristle at his thesis that females have contributed little to creating culture through the ages. Baumeister boldly states his opinion without taking himself, and feminists, too seriously. getAbstract suggests this book to managers interested in understanding gender inequities and differences. Just be prepared for some fallout around the office if you start using this as your guidebook.

Roy F. Baumeister, a professor of psychology at Florida State University, has written extensively on identity, gender and culture.

“Is There Anything Good About Men?”

Simply posing this leading question raises eyebrows, with its hint that men might outperform women in any way. Despite the commonly held notion that women outdo men in various different areas, society doesn’t allow for much discussion of the opposite idea. The explanation of gender inequity generally takes one of two forms: either the age-old belief that men dominate because they are better at most things than women, or the newer conceit that men and women are equal but that men have conspired to keep women down.

Yet another explanation is based on diverse abilities and “tradeoffs” between the genders: Men and women excel in different domains for good reasons, some biological and some cultural. A man’s ability in one area offsets his weakness in another, and the same applies to women, too.

Men and women fill unique roles within cultures, and they should value each other’s contributions rather than try for one-upmanship. For instance, some feminists cite salary differences between the sexes as a proxy for society’s prejudice against women. In fact, social science finds several reasons for the gender pay gap that don’t include...