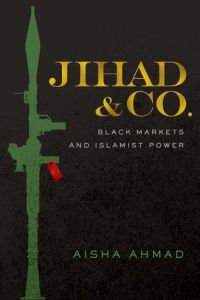 Aisha Ahmad, assistant professor of political science at the University of Toronto, says policymakers should be aware of the business community’s power to influence political outcomes and battlefield results – in other words, they should follow the money. She provides a rich, instructive history of Islamist jihad business activity during the Afghan and Somalian civil wars. She says these conflicts led businessmen to grow beards, wear traditional Muslim clothing and support Islamic charities to project an identity that cut across factions and reached more customers. Some Islamist groups established order by drawing support from opposing factions – even during civil wars – and lowering the cost of doing business.

Aisha Ahmad, an assistant professor of political science at the University of Toronto, is a senior researcher at the Munk School of Global Affairs.

Civil wars in Afghanistan and Somalia led to the establishment of Islamist proto-states.

By the summer of 1993, the civil war in Afghanistan expanded across its border into Pakistan, where bazaars in Peshawar sold weapons to both sides. Seven major warlord-led factions representing various ethnic and tribal groups fought in the civil war. In 1994, an Islamist militia – the Taliban – set out to subdue these factions. By 1998, it controlled every major Afghan city and imposed extremely conservative Islamist policies, including bans on musical performances, sporting events and female education.

A similar trend began to unfold in Somalia during the 1990s. In 1991, the state government disintegrated; clan-based militias took control of the country. Their need for weapons and supplies spawned a new elite class of Somali business magnates. In the capital, Mogadishu, bazaars offered “everything from antitank weapons to stolen food aid.” By 2006, the Islamic Courts Union (ICU) were in control of most of Somalia. The ICU established a government and put the country under the rule of law.

Out of the chaos of civil war...