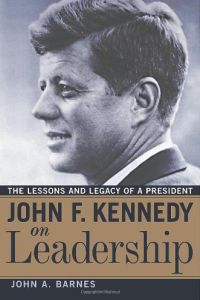 In the 40-plus years since John F. Kennedy's assassination, many people have forgotten how far American politicians have come in their public personas. Every candidate tries to use the media, savvy advisers, staged events and a winning personality to develop an authentic, vote-getting public voice. Kennedy was the first president to master these essential political tools. This made him one of America's most popular presidents, as well as a celebrity. Kennedy's political personality was so strong that it virtually transformed the presidency. In this rich historical and personal story, author John A. Barnes does a great job of showing how Kennedy operated. JFK was enmeshed in pivotal events and each circumstance tested his ability to lead. Barnes clearly presents Kennedy's triumphs and shortcomings as well as his formula for successful leadership. getAbstract recommends this to aspiring and current leaders, and to those interested in history - or in politics the way it used to be.

John A. Barnes has been a writer, journalist and television commentator for more than 17 years. His columns have appeared in the Boston Herald, The Detroit News and The New York Post. He is also the author of Ulysses S. Grant on Leadership.

John F. Kennedy changed the presidency. He used the media and his own celebrity to hold public interest. Yet, he also advanced a controversial political agenda, relying on political acumen and leadership as well as style. JFK earned his leadership credentials with decisive action based on firm principles, including the following:

Your vision must encourage and motivate people to act. Make it unforgettable, unmistakable and widely accessible. Kennedy's vision was shaped by the Cold War, communist expansion into China and Cuba, and questions about how America's consumer society conflicted with its "national purpose." For guidance, JFK modeled himself after Winston Churchill and Franklin D. Roosevelt. Both men came from wealthy families, served in military positions and entered politics after their return to civilian life. To be widely accepted, a vision should be straightforward, easily understood, optimistic, unforgettable and complimentary to the audience's values. The speaker should personify the vision. When this vision is grand enough, it can also be flexible and take on different meanings for different groups...

Leadership in Turbulent Times
9
Kings and Presidents
8
The Evangelicals
9
Convinced!
9
All Dreams on Deck
7
Stories that Stick
8