Summary of Keys to Prosperity 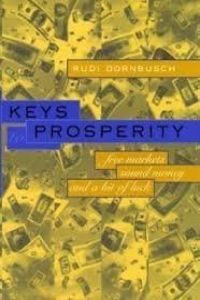 This entertaining and sharply written collection of essays surveys the essential elements needed to assure prosperity in the 21st-century global economy. Some of the essays are dated (the only major flaw here), and some of author Rudi Dornbusch’s predictions have already been proven wrong, but enough of his predictions are dead-on accurate that his views command attention. His policy prescriptions are rooted in the real world and grounded in practical experience. The region-by-region, nation-by-nation analysis is particularly intriguing and accentuates the clarity and accessibility of Dornbusch’s sophisticated - if sometimes controversial - economic arguments. getAbstract recommends this book as excellent reading for policymakers, investors and anyone interested in international markets and globalization.

Rudi Dornbusch is the Ford Professor of Economics and International Management at the Massachusetts Institute of Technology.

The 20th century was the best ever, despite two world wars and the Great Depression. Humankind is farther along than ever before, in part because creative destruction is the mechanism of economic progress - as you can see in the dismantling of the nation state in favor of a global economy.

Globalization and internationalism became the rule in trade in the second half of the 19th century and are the rule again today. Globalization is the great challenge of the next century. Policymakers must be ready to address instability soundly, with prosperity-oriented policies, not regulations. A century ago the state, as an entity, barely existed in the economic sphere. The Depression and the World Wars provoked suspicion of the global economy and led to the rise of the welfare state and the public-sector economy. Today, the economic state is shrinking everywhere. The state itself is no longer the right frame of reference for the economy.

Ingredients for Growth and Prosperity

A high savings rate and technological innovation are vital to economic progress. In recent decades, high-growth countries have had more schooling and investment, less inflation...