Summary of Leadership A to Z 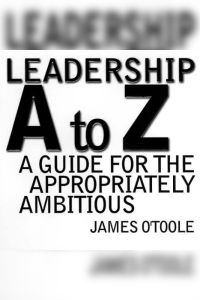 This simple but effective book is written for a general audience with interest in managerial, supervisory and leadership concepts. The book is structured as a dictionary of terms relating to leadership. While some readers may like the A-B-C division of information, others may find the book somewhat disjointed, as the format forces you to skip around from idea to idea. But then, as author James O’Toole points out, readers are invited to seek the nuggets that appeal to them, letter by letter. The connective tissue that O’Toole lays between the entries is ambition, which he says is the single pre-requisite to leadership and the one common characteristic that all great leaders share. getAbstract recommends this accessible summary of basic leadership principles, although hardcore readers of leadership literature might be better off elsewhere.

James O’Toole  is a Research Professor in the Center for Effective Organizations at the University of California and Chairman of the Board of Academic Advisors to Booz-Allen and Hamilton’s Strategic Leadership Center. He is the author of Leading Change.

The basic character trait that all leaders must possess is ambition. To be a leader, you must truly want to lead and be committed to your task, much as Gandhi dedicated his life and risked everything to bring independence to India. To be successful, leaders need to feel compelled to help their organization and willing to do what it takes to attain that goal. For instance, when Jack Welch took over GE, he wasn’t satisfied with the company’s high profits, blue-chip performance on Wall Street and national respect. He wanted to make GE the "world’s most competitive company," so he took GE to a higher level of performance.

The ABC’s of Leadership